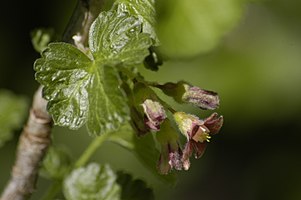 Commercial production of jostaberries is limited because they are not well-suited to mechanical harvesting. Compared to most other fruits, harvesting jostaberries is relatively labor-intensive per kilogram. Although harder to pick than blackcurrants, the plant is thornless.

The plant itself grows to a maximum height of about 2 m, flowering in mid-spring, with fruit setting and ripening on a similar timetable to the blackcurrant. The plant displays hybrid vigor, growing and fruiting well and being resistant to a number of common diseases afflicting other Ribes. In particular the plant is resistant to mildew, leaf spot, white pine blister rust, and big bud gall mite. Flowers are hermaphrodite and the plant is self-fertile following insect pollination. Propagation is usually by cuttings, rather than by seeds.