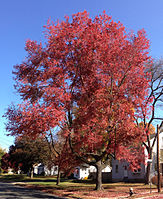 Though A. rubrum is sometimes easy to identify, it is highly changeable in morphological characteristics. It is a medium to large sized tree, reaching heights of 27 to 38 metres (90 to 120 ft) and exceptionally over 41 metres (135 feet) in the southern Appalachians where conditions favor its growth. The leaves are usually 9 to 11 centimetres (3+1⁄2 to 4+1⁄4 in) long on a full-grown tree. The trunk diameter often ranges from 46 to 88 cm (18 to 35 in); depending on the growing conditions, however, open grown trees can attain diameters of up to 153 centimetres (60 in). The trunk will remain free of branches until some distance up the tree on forest grown trees, while individuals grown in the open are shorter and thicker with a more rounded crown. Trees on poorer sites often become malformed and scraggly. Generally the crown is irregularly ovoid with ascending whip-like curved shoots. The bark is a pale grey and smooth when the individual is young. As the tree grows the bark becomes darker and cracks into slightly raised long plates. The largest known living red maple is located near Armada, Michigan, at a height of 38.1 m (125 ft) and a bole circumference, at breast height, of 4.95 m (16 ft 3 in).

The leaves of the red maple offer the easiest way to distinguish it from its relatives. As with all North American maple trees, they are deciduous and arranged oppositely on the twig. They are typically 5–10 cm (2–4 in) long and wide with 3-5 palmate lobes with a serrated margin. The sinuses are typically narrow, but the leaves can exhibit considerable variation. When five lobes are present, the three at the terminal end are larger than the other two near the base. In contrast, the leaves of the related silver maple, A. saccharinum, are much more deeply lobed, more sharply toothed and characteristically have 5 lobes. The upper side of A. rubrum's leaf is light green and the underside is whitish and can be either glaucous or hairy. The leaf stalks are usually red and are up to 10 cm (4 in) long. The leaves can turn a characteristic brilliant red in autumn, but can also become yellow or orange on some individuals. Soil acidity can influence the color of the foliage and trees with female flowers are more likely to produce orange coloration while male trees produce red. The fall colors of red maple are most spectacular in the northern part of its range where climates are cooler.

The twigs of the red maple are reddish in color and somewhat shiny with small lenticels. Dwarf shoots are present on many branches. The buds are usually blunt and greenish to reddish in color, generally with several loose scales. The lateral buds are slightly stalked, and in addition there may be collateral buds present as well. The buds form in fall and winter and are often visible from a distance due to their large size and reddish tint. The leaf scars on the twig are V-shaped and contain 3 bundle scars.

The flowers are generally unisexual, with male and female flowers appearing in separate sessile clusters, though they are sometimes also bisexual. They appear in late winter to early spring, from December to May depending on elevation and latitude, usually before the leaves. The tree itself is considered polygamodioecious, meaning some individuals are male, some female, and some monoecious. Under the proper conditions, the tree can sometimes switch from male to female, male to hermaphroditic, and hermaphroditic to female. The red maple will begin blooming when it is about 8 years old, but it significantly varies between tree to tree: some trees may begin flowering when they are 4 years old. The flowers are red with 5 small petals and a 5-lobed calyx, usually at the twig tips. The staminate flowers are sessile. The pistillate flowers are borne on pedicels that grow out while the flowers are blooming, so that eventually the flowers are in a hanging cluster with stems 1 to 5 cm (1⁄2 to 2 in) long. The petals are lineal to oblong in shape and are pubescent. The pistillate flowers have one pistil formed from two fused carpels with a glabrous superior ovary and two long styles that protrude beyond the perianth. The staminate flowers contain between 4 and 12 stamens, often with 8.

The fruit is a samara 15 to 25 millimeters (5⁄8 to 1 in) long that grows in pairs with somewhat divergent wings at an angle of 50 to 60 degrees. They are borne on long slender stems and are variable in color from light brown to reddish. They ripen from April through early June, before even the leaf development is altogether complete. After they reach maturity, the seeds are dispersed for a 1 to 2 week period from April through July.