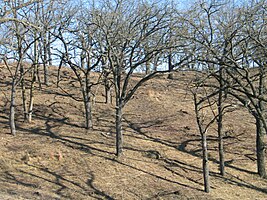 Quercus macrocarpa is a large deciduous tree growing up to 98 ft (30 m), rarely 160 ft (50 m), in height, and is one of the most massive oaks with a trunk diameter of up to 10 ft (3 m); reports of taller trees occur, but have not been verified. It is one of the slowest-growing oaks, with a growth rate of 1 ft (30 cm) per year when young. However, other sources state that a bur oak tree that is planted in the ground grows up to 3 ft (91 cm) per year. A 20-year-old tree will be about 20 ft (6 m) tall if grown in full sun. Naturally occurring saplings in forests will typically be older. Bur oaks commonly get to be 200 to 300 years old, and may live up to 400 years. The bark is a medium gray and somewhat rugged.

The leaves are 2 3⁄4–6 in (7–15 cm) long and 2–5 in (5–13 cm) broad, variable in shape, with a lobed margin. Most often, the basal two-thirds is narrower and deeply lobed, while the apical third is wider and has shallow lobes or large teeth. The flowers are greenish-yellow catkins, produced in the spring. The acorns are very large, 1–2 in (2.5–5 cm) long and 3⁄4–1 1⁄2 in (2–4 cm) broad, having a large cup that wraps much of the way around the nut, with large overlapping scales and often a fringe at the edge of the cup.

Bur oak is sometimes confused with overcup oak and white oak, both of which it occasionally hybridizes with.

The acorns are the largest of any North American oak (thus the species name macrocarpa, from Ancient Greek μακρός makrós "large" and καρπός karpós "fruit"), and are an important wildlife food; American black bears sometimes tear off branches to get them. However, heavy nut crops are borne only every few years. In this evolutionary strategy, known as masting, the large seed crop every few years overwhelms the ability of seed predators to eat the acorns, thus ensuring the survival of some seeds. Other wildlife, such as deer and porcupine, eat the leaves, twigs and bark. Cattle are heavy browsers in some areas. The bur oak is the only known foodplant of Bucculatrix recognita caterpillars.

Bur oaks primarily grow in a temperate climate, in regions such as (Wisconsin, Minnesota, Illinois, Indiana, Iowa, etc), where their tree rings are read as one year of growth. This is because the trees grow more in warm wet climates and less in cold dry climates. So, when the season changes so does the amount the tree ring will grow for that year.