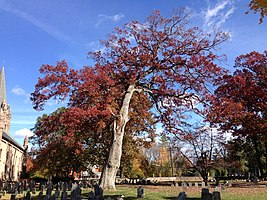 Quercus alba typically reaches heights of 80 to 100 feet (24–30 m) at maturity, and its canopy can become quite massive as its lower branches are apt to extend far out laterally, parallel to the ground. Trees growing in a forest will become much taller than ones in an open area which develop to be short and massive. The Mingo Oak was the tallest known white oak at 145 feet before it was felled in 1938. it It is not unusual for a white oak tree to be as wide as it is tall, but specimens growing at high altitudes may only become small shrubs.

White oak may live 200 to 300 years, with some even older specimens known. The Wye Oak in Wye Mills, Maryland was estimated to be over 450 years old when it finally fell in a thunderstorm in 2002.

Sexual maturity begins at around 20 years, but the tree does not produce large crops of acorns until its 50th year and the amount varies from year to year. Acorns deteriorate quickly after ripening, the germination rate being only 10% for six-month-old seeds. As the acorns are prime food for insects and other animals, all may be consumed in years of small crops, leaving none that would become new trees.

The bark is a light ash-gray and peels somewhat from the top, bottom and/or sides.

In spring the young leaves are of a delicate, silvery pink and covered with a soft, blanket-like down. The petioles are short, and the leaves which cluster close to the ends of the shoots are pale green and downy with the result that the entire tree has a misty, frosty look. This condition continues for several days, passing through the opalescent changes of soft pink, silvery white and finally yellow green.

The leaves grow to be 5 to 8.5 inches (13–22 cm) long and 2.75 to 4.5 inches (7.0–11.4 cm) wide and have a deep glossy green upper surface. They usually turn red or brown in autumn, but depending on climate, site, and individual tree genetics, some trees are nearly always red, or even purple in autumn. Some brown, dead leaves may remain on the tree throughout winter until very early spring. The lobes can be shallow, extending less than halfway to the midrib, or deep and somewhat branching.

Quercus alba is sometimes confused with the swamp white oak, a closely related species, and the bur oak. The white oak hybridizes freely with the bur oak, the post oak, and the chestnut oak.