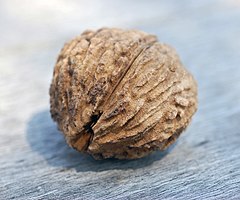 The fruit production tends to occur irregularly with some years producing larger crops than others (see mast year). Fruiting may begin when the tree is 4–6 years old, but large crops take 20 years. Total lifespan of J. nigra is about 130 years. Like other trees of the order Fagales, such as oaks, hickories, chestnuts, and birches, it is monoecious, with wind-pollinated catkins. Male and female flowers are in separate spikes, and the female flowers typically appear before the male on a single tree (dichogamy). As a consequence, self-pollination is unlikely. However, individual trees are commonly self-compatible; if they are not pollinated by neighboring trees, they may set self-fertilized seeds. For maximum seed germination, the seeds should be cold-moist stratified for 3–4 months, although the exact time depends on the seed source. The seedlings emerge in April or May. While most trees with taproots have a reputation for slow growth, black walnut is an exception and can achieve very rapid growth in the seedling stage, typically 90 cm (35 in) their first year and even more in the 2nd year. Black walnut will not leaf out until temperatures have warmed sufficiently. Leafout in spring is initiated when daytime highs reach approximately 70 °F (21 °C) and leaf drop in fall when daytime highs fall below 65 °F (15 °C). As such, the exact timing will vary in different regions of the US and depending on the weather conditions from year to year, leafout is typically early April in the southern part of its range and sometimes not until the end of May or beginning of June in cooler areas. Leaf drop in fall may begin in late September in cooler regions and not until November in southern areas.

Black walnut has a strong taproot, which makes the seedlings resilient, but difficult to transplant.

Black walnut is more resistant to frost than the English or Persian walnut, but thrives best in the warmer regions of fertile, lowland soils with high water tables, although it will also grow in drier soils, but much more slowly. Some soils preferred by black walnut include Alfisol and Entisol soil types. Black walnut grows best on sandy loam, loam, or silt loam type soils but will also grow well on silty clay loam soils. It prefers these soils because they hold large quantities of water, which the tree draws from during rainless periods.

Visually, black walnut is similar to the butternut (Juglans cinerea) in leaf shape, and the range also overlaps significantly. The fruits are quite different, and their presence makes an identification easy, as black walnut fruits are round (spherical) and butternuts are more oval-oblong shaped. When a fruit is not available, two species can be differentiated based on the leaf scars, or the place where the leaf meets the stem: butternut has a leaf scar with a flat upper edge and with a velvety ridge above that flat part, but black walnut has an indented leaf scar with no hairy ridge.