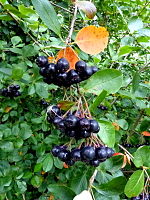 Aronia melanocarpa, called the black chokeberry, is a species of shrubs in the rose family native to eastern North America, ranging from Canada to the central United States, from Newfoundland west to Ontario and Minnesota, south as far as Arkansas, Alabama, and Georgia. This plant has been introduced and is cultivated in Europe.

It is a branching shrub with glossy dark green leaves that take on a red color in the autumn; it grows well in the sun and part-shade, often to heights of six feet or more, forming clumps by means of stems rising from the roots, its flowers are white or pink, they appear at the end of spring and produce black fruits in September. Many people consider the fruits to be foul-tasting raw, but the flavor improves when used in recipes with added sugar. A wine with a similar taste to Cabernet can also be made. They are among the richest berries in antioxidants and have been marketed as a superfood. The plants are relatively easy to clone and root, with summer being the optimal time to take cuttings. Some birds eat the berries.