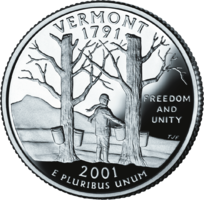 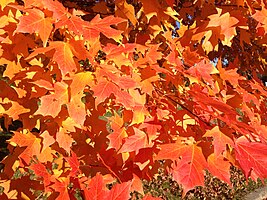 Acer saccharum is a deciduous tree normally reaching heights of 25–35 m (80–115 ft), and exceptionally up to 45 m (150 ft). A 10-year-old tree is typically about 5 m (20 ft) tall. As with most trees, forest-grown sugar maples form a much taller trunk and narrower canopy than open-growth ones.

The leaves are deciduous, up to 20 cm (7.9 in) long and wide, palmate, with five lobes and borne in opposite pairs. The basal lobes are relatively small, while the upper lobes are larger and deeply notched. In contrast with the angular notching of the silver maple, however, the notches tend to be rounded at their interior. The fall color is often spectacular, ranging from bright yellow on some trees through orange to fluorescent red-orange on others. Sugar maples also have a tendency to color unevenly in fall. In some trees, all colors above can be seen at the same time. They also share a tendency with red maples for certain parts of a mature tree to change color weeks ahead of or behind the remainder of the tree. The leaf buds are pointy and brown-colored. The recent year's growth twigs are green, and turn dark brown.

The flowers are in panicles of five to ten together, yellow-green and without petals; flowering occurs in early spring after 30–55 growing degree days. The sugar maple will generally begin flowering when it is between 10 and 200 years old. The fruit is a pair of samaras (winged seeds). The seeds are globose, 7–10 mm (9⁄32–13⁄32 in) in diameter, the wing 2–3 cm (3⁄4–1+1⁄4 in) long. The seeds fall from the tree in autumn, where they must be exposed to 45 days of temperatures below 4 °C (39 °F) to break their coating down. Germination of A. saccharum is slow, not taking place until the following spring when the soil has warmed and all frost danger is past. It is closely related to the black maple, which is sometimes included in this species, but sometimes separated as Acer nigrum. The western American bigtooth maple (Acer grandidentatum) is also treated as a variety or subspecies of sugar maple by some botanists.

Although many people think a red sugar maple leaf is featured on the flag of Canada, the official maple leaf does not belong to any particular maple species; although it perhaps most closely resembles a sugar maple leaf of all the maple species in Canada, the leaf on the flag was specially designed to be as identifiable as possible on a flag waving in the wind without regard to whether it resembled a particular species' foliage.