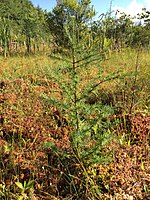 Larix laricina is a small to medium-size boreal coniferous and deciduous tree reaching 10–20 m (33–66 ft) tall, with a trunk up to 60 cm (24 in) diameter. Tamaracks and larches (Larix species) are deciduous conifers. The bark is tight and flaky, pink, but under flaking bark it can appear reddish. The leaves are needle-like, 2–3 cm (3⁄4–1 1⁄4 in) short, light blue-green, turning bright yellow before they fall in the autumn, leaving the pale pinkish-brown shoots bare until the next spring. The needles are produced spirally on long shoots and in dense clusters on long woody spur shoots. The cones are the smallest of any larch, only 1–2.3 cm (3⁄8–7⁄8 in) long, with 12-25 seed scales; they are bright red, turning brown and opening to release the seeds when mature, 4 to 6 months after pollination.