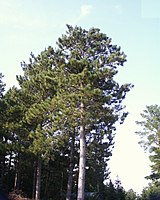 Red pine is a coniferous evergreen tree characterized by tall, straight growth in a variety of habitats. It usually ranges from 20–35 m (66–115 ft) in height and 1 m (3 ft 3 in) in trunk diameter, exceptionally reaching 43.77 m (143 ft 7 in) tall. The crown is conical, becoming a narrow rounded dome with age. The bark is thick and gray-brown at the base of the tree, but thin, flaky and bright orange-red in the upper crown; the tree's name derives from this distinctive character. Some red color may be seen in the fissures of the bark. The species is self pruning; there tend not to be dead branches on the trees, and older trees may have very long lengths of branchless trunk below the canopy.

The leaves are needle-like, dark yellow-green, in fascicles of two, 12–18 cm (4 3⁄4–7 in) long, and brittle. The leaves snap cleanly when bent; this character, stated as diagnostic for red pine in some texts, is however shared by several other pine species. The cones are symmetrical ovoid, 4–6 cm (1 1⁄2–2 1⁄4 in) long by 2.5 cm (1 in) broad, and purple before maturity, ripening to nut-blue and opening to 4–5 cm (1 1⁄2–2 in) broad, the scales without a prickle and almost stalkless.

Red pine is notable for its very constant morphology and low genetic variation throughout its range, suggesting it has been through a near extinction in its recent evolutionary history. A genetic study of nuclear microsatellite polymorphisms among populations distributed throughout its natural range found that red pine populations from Newfoundland are genetically distinct from most mainland populations, consistent with dispersal from different glacial refugia in this highly self-pollinating species.