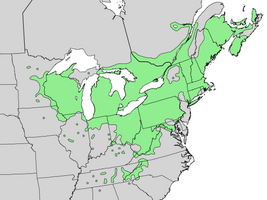 Rhus typhina is a dioecious, deciduous shrub or small tree growing up to 5 m (16 ft) tall by 6 m (20 ft) broad. It has alternate, pinnately compound leaves 25–55 cm (10–22 in) long, each with 9–31 serrate leaflets 6–11 cm (2+1⁄4–4+1⁄4 in) long. Leaf petioles and stems are densely covered in rust-colored hairs. The velvety texture and the forking pattern of the branches, reminiscent of antlers, have led to the common name "stag's horn sumac". Staghorn sumac grows as female or male clones.

Small, greenish-white through yellowish flowers occur in dense terminal panicles, and small, green through reddish drupes occur in dense infructescences. Flowers occur from May through July and fruit ripens from June through September in this species’ native range. Infructescences are 10–20 cm (4–8 in) long and 4–6 cm (1+1⁄2–2+1⁄4 in) broad at their bases. Fall foliage is brilliant shades of red, orange and yellow. Fruit can remain on plants from late summer through spring. It is eaten by many birds in winter.

Staghorn sumac spreads by seeds and rhizomes and forms clones often with the older shoots in the center and younger shoots around central older ones. Large clones can grow from ortets in several years.

Within Anacardiaceae, staghorn sumac is not closely related to poison sumac (Toxicodendron vernix), even though they share the name "sumac".

In late summer some shoots have galls on leaf undersides, caused by the sumac leaf gall aphid, Melaphis rhois. The galls are not markedly harmful to the tree.