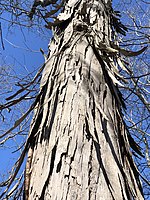 Carya ovata, the shagbark hickory, is a common hickory in the Eastern United States and southeast Canada. It is a large, deciduous tree, growing well over 100 ft (30 m) tall, and can live more than 350 years. The tallest measured shagbark, located in Savage Gulf, Tennessee, is over 150 ft (46 m) tall. Mature shagbarks are easy to recognize because, as their name implies, they have shaggy bark. This characteristic is, however, only found on mature trees; young specimens have smooth bark.

The shagbark hickory's nut is edible and has a very sweet taste.

The leaves are 30–60 cm (12–24 in) long, pinnate, with five (rarely three or seven) leaflets, the terminal three leaflets much larger than the basal pair. The shagbark hickory is monoecious. Staminate flowers are borne on long-stalked catkins at the tip of old wood or in the axils of the previous season's leaves. Pistillate flowers occur in short terminal spikes. The fruit is a drupe 2.5 to 4.0 cm (1 to 1+1⁄2 in) long, an edible nut with a hard, bony shell, contained in a thick, green four-sectioned husk which turns dark and splits off at maturity in the fall. The terminal buds on the shagbark hickory are large and covered with loose scales. Shagbark hickory nuts were a significant food source for the Algonquins. Red squirrels, gray squirrels, raccoons, chipmunks, and mice are consumers of hickory nuts. Other consumers include black bears, gray and red foxes, rabbits, and bird species such as mallards, wood ducks, bobwhites, and wild turkey.

The two varieties are:

Some sources regard southern shagbark hickory as the separate species Carya carolinae-septentrionalis.