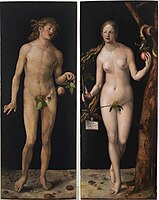 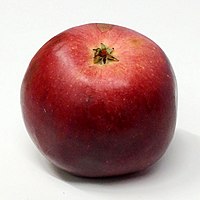 The apple is a deciduous tree, generally standing 2 to 4.5 m (6 to 15 ft) tall in cultivation and up to 9 m (30 ft) in the wild. When cultivated, the size, shape and branch density are determined by rootstock selection and trimming method. The leaves are alternately arranged dark green-colored simple ovals with serrated margins and slightly downy undersides.

Blossoms are produced in spring simultaneously with the budding of the leaves and are produced on spurs and some long shoots. The 3 to 4 cm (1 to 1+1⁄2 in) flowers are white with a pink tinge that gradually fades, five petaled, with an inflorescence consisting of a cyme with 4–6 flowers. The central flower of the inflorescence is called the "king bloom"; it opens first and can develop a larger fruit.

The fruit is a pome that matures in late summer or autumn, and cultivars exist in a wide range of sizes. Commercial growers aim to produce an apple that is 7 to 8.5 cm (2+3⁄4 to 3+1⁄4 in) in diameter, due to market preference. Some consumers, especially those in Japan, prefer a larger apple, while apples below 5.5 cm (2+1⁄4 in) are generally used for making juice and have little fresh market value. The skin of ripe apples is generally red, yellow, green, pink, or russetted, though many bi- or tri-colored cultivars may be found. The skin may also be wholly or partly russeted i.e. rough and brown. The skin is covered in a protective layer of epicuticular wax. The exocarp (flesh) is generally pale yellowish-white, though pink, yellow or green exocarps also occur.

The original wild ancestor of Malus domestica was Malus sieversii, found growing wild in the mountains of Central Asia in southern Kazakhstan, Kyrgyzstan, Tajikistan, and northwestern China. Cultivation of the species, most likely beginning on the forested flanks of the Tian Shan mountains, progressed over a long period of time and permitted secondary introgression of genes from other species into the open-pollinated seeds. Significant exchange with Malus sylvestris, the crabapple, resulted in current populations of apples being more related to crabapples than to the more morphologically similar progenitor Malus sieversii. In strains without recent admixture the contribution of the latter predominates.

Apples are diploid (though triploid cultivars are not uncommon), have 17 chromosomes and an estimated genome size of approximately 650 Mb. Several whole genome sequences have been made available, the first one in 2010 was based on the diploid cultivar 'Golden Delicious'. However, this first whole genome sequence turned out to contain several errors in part owing to the high degree of heterozygosity in diploid apples which, in combination with an ancient genome duplication, complicated the assembly. Recently, double- and trihaploid individuals have been sequenced, yielding whole genome sequences of higher quality. The first whole genome assembly was estimated to contain around 57,000 genes, though the more recent genome sequences support more moderate estimates between 42,000 and 44,700 protein-coding genes. Among other things, the availability of whole genome sequences has provided evidence that the wild ancestor of the cultivated apple most likely is Malus sieversii. Re-sequencing of multiple accessions has supported this, while also suggesting extensive introgression from Malus sylvestris following domestication.