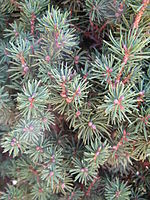 The white spruce is a large evergreen conifer which normally grows to 15 to 30 metres (50 to 100 ft) tall, but can grow up to 40 m (130 ft) tall with a trunk diameter of up to 1 m (3 ft 3 in). The bark is thin and scaly, flaking off in small circular plates 5 to 10 centimetres (2 to 4 in) across. The crown is narrow – conical in young trees, becoming cylindrical in older trees. The shoots are pale buff-brown, glabrous in the east of the range, but often pubescent in the west, and with prominent pulvini. The leaves are needle-like, 12 to 20 millimetres long, rhombic in cross-section, glaucous blue-green above (hence glauca) with several thin lines of stomata, and blue-white below with two broad bands of stomata.

The cones are pendulous, slender, cylindrical, 3 to 7 cm long and 1.5 cm wide when closed, opening to 2.5 cm broad. They have thin, flexible scales 15 mm long with a smoothly rounded margin. They are green or reddish, maturing to pale brown 4 to 8 months after pollination. The seeds are black, 2 to 3 mm long, with a slender, 5 to 8 mm long pale brown wing.

Seeds are small, 2.5 to 5 mm long, oblong, and acute at the base. Determinations of the average number of sound seeds per white spruce cone have ranged from 32 to 130.

Common causes of empty seed are lack of pollination, abortion of the ovule, and insect damage.

The average weight per individual seed varies from 1.1 mg to 3.2 mg.

Each seed is clasped by a thin wing 2 to 4 times as long as the seed. Seed and wing are appressed to the cone scale. Embryo and megagametophyte are soft and translucent at first; later the endosperm becomes firm and milky white, while the embryo becomes cream-colored or light yellow. At maturity, the testa darkens rapidly from light brown to dark brown or black. Mature seeds “snaps in two” when cut by a sharp knife on a firm surface.

Cone colour also can be used to help determine the degree of maturation, but cones may be red, pink or green. Collection and storage dates and conditions influence germination requirements and early seedling growth.

Seed dispersal begins after cone scales reflex with cone maturation in the late summer or early fall of the year of formation. Cones open at moisture contents of 45% to 70% and specific gravities of 0.6 to 0.8. Weather affects both the initiation and pattern of seed dispersal, but cone opening and the pattern of seed dispersal can vary among trees in the same stand. Even after dispersal has begun, cold, damp weather will cause cone scales to close; they will reopen during dry weather. Most seed falls early rather than late, but dispersal may continue through fall and winter and even into the next growing season. Seed dispersal occurs mainly in late summer or early fall.

White spruce seed is initially dispersed through the air by wind. Both the initiation and pattern of seed dispersal depend on the weather, but these can vary among trees in the same stand. Small amounts of white spruce seed are normally dispersed beyond 100 m from the seed source, but exceptionally seeds have been found more than 300–400 m from the nearest seed source.

The root system of white spruce is highly variable and adaptable, responding to a variety of edaphic factors, especially soil moisture, soil fertility, and mechanical impedance. On soils that limit rooting depth, the root system is plate-like, but it is a common misconception to assume that white spruce is genetically constrained to develop plate-like root systems irrespective of soil conditions. In the nursery, or naturally in the forest, white spruce usually develops several long 'running' roots just below the ground surface.

The structure of the tracheids in the long lateral roots of white spruce varies with soil nitrogen availability.

White spruce can live for several hundred years, with an estimated average lifespan of 250 to 300 years.

Slow-growing trees in rigorous climates are also capable of great longevity. White spruce 6 to 10 m (20 to 33 ft) high on the shore of Urquhart Lake, Northwest Territories, were found to be more than 300 years old.

The bark of mature white spruce is scaly or flaky, grey-brown or ash-brown, but silvery when freshly exposed. Resin blisters are normally lacking, but the Porsild spruce Picea glauca var. porsildii Raup has been credited with having smooth resin-blistered bark.

White spruce bark is mostly less than 8 mm and not more than 9.5 mm thick.

Isorhapontin can be found in spruce species such as the white spruce.